Opposite sex: what attracts us and why?

Whether you are a man or a woman, I have a question for you ... Have you ever wondered why you are attracted to the opposite sex? In other words, are you fully aware of what physically attracts you to the other person, which parts of their body have a real effect on you? The answer is most certainly yes: you have heard that a small, firm male bottom makes women melt, and women’s breasts attract the tireless eye of men. But let's go further ...

Regarding the attraction of women to men, I already had my little idea to write this article. The converse was not necessarily obvious. I had to do my survey with my friends (it sets the mood at a meal) and they gave me their opinion on men. Some investigations and research later, so I give you my results.

First of all, I want to warn you that this article is not politically correct. However, I would say it is biologically legitimate. So don't be surprised if Man is sometimes considered in this article by his animal nature.

Let's start to decipher all of this for the women and for the men who would be impatient, I slipped a video 3/4 of the article that should amaze more than one.

What do women prefer: buttocks, torso / arms or legs?

When it comes to which part of the male body they prefer, women can be distinguished into three groups. Those who answer that they easily fall for small, firm buttocks, others for a muscular torso and arms and finally those for muscular legs. Only 3 parts of the body predominate. To my astonishment, the eyes and the face come behind among the answers. However, I was not surprised not to see the toes appear ... Why?

Biological response: A physique that emphasizes a home's reproductive capacity and ability to protect / nourish the family appeals to women. This process is unconscious.

In our current society where there is real security outside your cave (please mean house / apartment) and where you can find your food at the crossroads around the corner, this doesn't make much sense anymore. Let's say that if women are still attracted to an athletic body, it is because it is a biological inheritance from our ancestors. I told you this article was not politically correct, but human nature is nonetheless animal.

Besides, why women prefer men with deep and calm voices than with a low pitched voice. Biological response: because a deep voice indicates high testosterone levels.

Broad shoulders, muscular chest and arms, a tight waist are the signs of the male hunter. While women's bodies are generally wider at the hips than the shoulders, ethologists believe that men have developed this characteristic in order to enable them to lift heavy weapons and bring their prey home.

The buttocks are the part of the body that many women prefer but few really know why. The secret is that a firm, muscular rear end is a reproductive asset. At the time of the final pelvic thrust, the man performs a forward motion transfer that is facilitated by a firm, muscular buttocks. A man with a soft butt will have some difficulty with this forward movement. He will tend to throw his whole body forward during the act. And for women it's not ideal. In contrast, a tight little butt is more likely to do the job well.

Third group: women who love men's legs. They find them attractive as they are a symbol of male strength and endurance. Coming back to the hunter man we talked about above, man has the longest legs of any primate and narrow hips allow him to run fast for long distances.

What do men prefer: buttocks, chest or legs?

To illustrate what men find attractive in a woman, watch this video first. Do you think these photos illustrate necklines or ... is it more of a female posterior? I'll explain the analogy below.

Similar to what we saw with women in the paragraph above, we can also classify men into 3 groups. Those who prefer the buttocks, the others the chest and then also the legs.

Why ? (Be careful, the following sentence may be shocking). The bodies of women (relative to that of other primates) have evolved in such a way that they perpetually attract the attention of men in the reproductive environment. And the buttocks, chest and legs play a very important role in this process. 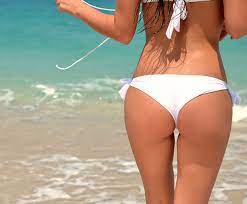 What men find attractive in a woman are firm, plump buttocks. Why ? Biological response: First, know that female buttocks are different from those of other primates. Indeed, they are "visible" by their continuously rebounded appearance. In primates, the buttocks are much more visible when the female is ready for mating.

Men are the only primates who can perform a sexual act face to face. In other primates, the male always approaches from the rear, and female primates in breeding season have their hindquarters swelling and red. This is a clear signal for the male. It is this biological trait that is at the origin of the attraction of men to female buttocks.

Wearing tight jeans helps highlight the buttocks and gives them a firm, round appearance. Add to that shoes with heels that give the back a certain arch and highlight the buttocks, and we see a swaying appearance that undoubtedly attracts the attention of men. Marilyn Moroe was also famous for removing 2 cm from her left heel in order to give more fullness to her sway. An additional asset of seduction.

The breast is also an asset of seduction linked to the capacity of reproduction. If you watched the video at the start of this part, what did you think? Was it a chest or was it buttocks?

Answer: the artist did not take pictures of breasts as the pictures suggest, but of buttocks. Incredible, isn't it? Indeed, a cleavage is quite surprisingly reminiscent of the vision of a pair of buttocks and many men cannot tell the difference in the photos. And we have just seen the strong signal that the buttocks represent when it comes to seduction.

For women who have little breast, I wanted to reassure you. Studies have shown that men love breasts regardless of size or shape. What has the most impact is the cleavage.

The reason men love long legs is once again biological. When a young girl goes through puberty, her legs grow as her hormones flow into her body to turn her into a woman. Big legs are an unconscious powerful non-verbal cue that tells men that she is no longer a young girl but a woman and is sexually mature and capable of having a child. It is for this reason that women's legs are often associated with a sexual asset.

Make sure you enter all the required information, indicated by an asterisk (*). HTML code is not allowed.